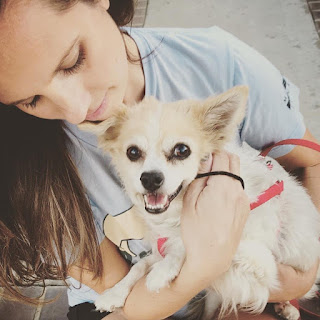 Dear Olivia. It’s so nice to meet you and welcome you to our SCPR family. You are safe now and were loved from the moment I heard about you. I promise to help you get healthy, be happy and allow you to live without fear of pain or abandonment and the freedom to be a dog. Much love, your foster mama.
Posted by Leesa at 10:22 AM No comments:

This this is What Rescue Looks Like❤️ 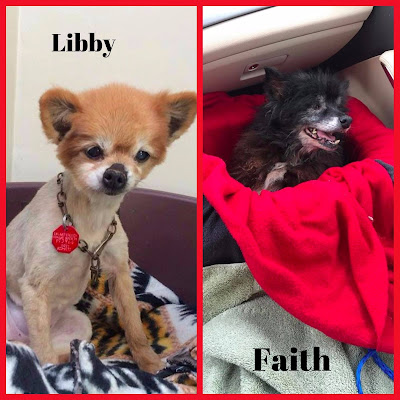 LeMer Bevan, a friend of SCPR,  came down to LA from San Diego for work. He and SCPR volunteer Sondra had been following the 12yr old girl to the left, Luna (now named Libby) who was at Inland Valley Humane Society, Pomona, CA. She had little to no chance of getting out of the shelter. Sondra being pregnant and tired, told herself no more rescuing dogs because as some of you know, it is very stressful, time consuming and exhausting.

LeMer finished  with work for the day and planned to go to Pomona to get Luna. Being that he loves senior poms (which is how he and Sondra met), he had no problem when asked.  In the meantime a 911 alarm that the girl on the right, now named Faith, was at a San Diego shelter and had until 5:30pm end of day,  and can ANYONE get her before the end of the day to save her life? Faith is a 15yr old senior with no eyes. The shelter thinks she may have been abused because her eyes (or lack there of) have lacerations, she has scars on her belly and her hair had been pulled.

LeMer Bevan was contacted  again and asked what are the chances when you get back to San Diego you could also get Faith before 5:30 as we are her only chance before euthanasia. Being the senior pom loving guy he is, he said sure! LeMer gets faith and makes his way back to Orange County to pass off Faith to an SCPR volunteer and then drove back to San Diego all in the same day.

It took four volunteers to get Faith out, to Orange County and then bathed all in the same day. She smelled badley and it took 3 baths to get her clean. LeMer later tells us that when he was picking up Faith from the shelter, he asked the young guy bringing her out if she wouldn't have made it past 5:30 if he hadn't come? He said no and thanks for taking her with tears in his eyes.

We commend every single person who had a hand in getting these two out and to safety and of course as we know, the real hard work is still left to be done.

Cash for Calories
Burn off those calories while walking fluffy using the FREE Wooftrax walking App found below! The Walk for a Dog mobile phone App is a dog-powered fundraising opportunity for SCPR at no cost to the user.  When dogs and their humans to exercise together, SoCalPomRescue benefits! 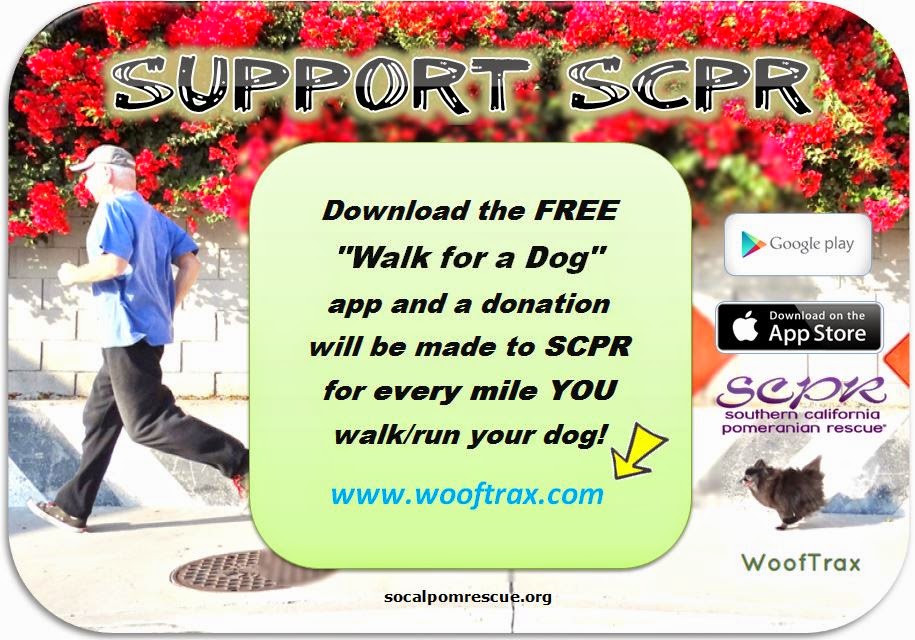 * Download the FREE Android/iPhone app below
* Press the “Start Walking for…” button
* When your walk has stopped it is credited to your selected shelter/rescue
* The more, the merrier.
* Spread the word, globally!

Testimony
"I like it. It was easy to install and very easy to use. I just have to make sure when I start walking that I close my screen on my iPhone. If I don't, I end up touching the Stop while placing it in my pocket and our walk is not logged. I had done this a few times before I got the hang of it. We have been walking for SCPR!!" - Teri E.

The more people around the world walking for our Fuzzy Butts,
the more Wooftrax will donate!


FREE 8 x 11 POMERANIAN STENCIL
Use to carve holiday pumpkins or to paint with! The possibilities are endless!!

Aired on 9-6-2014, SCPR's President Leesa Molina talks with Pet Place Radio Host, Marie Hulett about about Pommies and the world of rescue on KJAZZ 88.1 FM.

Segment is after the halftime break; the second half of the show. 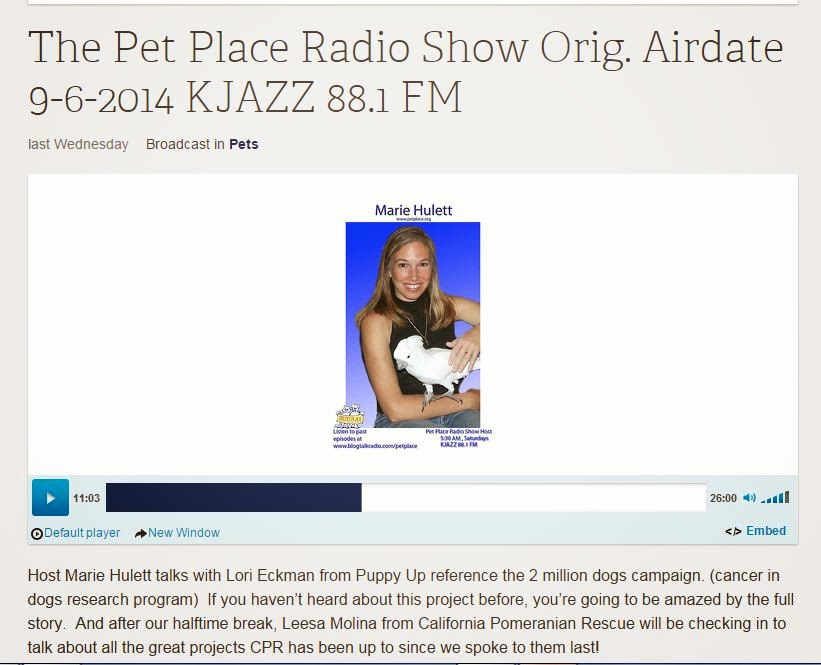 Pet adoption and
rescue powered by

This campaign is to raise funds needed to address the day-to-day expenses incurred by the rescue. Most people do not realize the costs involved in running a rescue. All nonprofit organizations need financial resources to help achieve their goals.

Our cost to rescue and place a dog starts at $200.00 and goes up depending on any special needs such as surgery or behavioral problems that need to be addressed with a dog behaviorist. Below is a list of the basic costs per dog put into rescue: